For Math/Science, we have defined and created superheroes and villains, learned about physics, and tested the laws of physics with different superpowers.
<
>
1. Share a major challenge you have overcome or an area you have grown in throughout the semester in Math/Science.
An area I have made growth in is being a better and more positive and encouraging leader. I feel like I was always a pretty good leader, but that I could still improve. I think I have improved by encouraging others others more and giving them positivity and a bit more freedom, and supporting them more than just guiding them and giving them hints.
2. Describe one praiseworthy product from Math/Science that you created this semester.
One praiseworthy product I created this semester was the superhero for the our comic. I didn't think that I would be able to create even an average piece of work considering I am not the best drawer. I tried and got a stencil for the body shape that helped a lot. I was able to create something I was proud of and surprised myself with what I made.
3. Describe one thing that you learned this semester in Math/Science that really got you thinking and why.
Something I learned this semester that got me thinking was when we did the golden ratio and Fibonacci pattern. It got me wondering where else I could find it and made me look at something greater than myself.
4. Explain your goal(s) for next semester in Math/Science and how you plan to achieve this goal(s).
My goal for next semester is to become closer to my classmates and keep working on my leadership skills. I will do this by getting into groups with people I'm not too close to, and during the projects, getting to know them better as an individual.
This is our life size superhero which we created in one of the two groups in our class. We were split in half, and one half created the superhero and the other created the villain. We got the villain, and created a half demon half girl. We had to get the proportional body before we could draw her, and first had to measure and draw her in a smaller scale. We then had to size her up so that she was a more proportional size for a human being. We had to multiply her smaller body by about 7 times to get her normal size. We then had to remeasure everything so that it was newly proportional and sketch, draw, and paint her out. 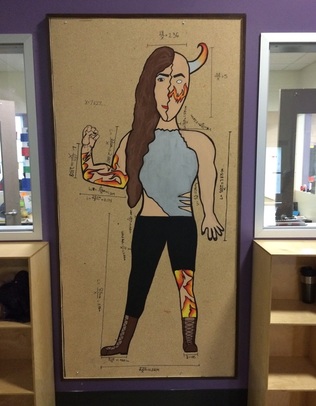 As a class, we created a hero definition. We first had a discussion about what makes a hero, who a hero could be, ad the differences and similarities between comic and real life heroes. We found that anyone could be a hero, and that everyone had their own special word for what a hero was. In this definition we added many qualities we thought should be embodied in a heroic figure. We added many different internal, behavioral, and moral qualities and traits which we believed a hero should have. 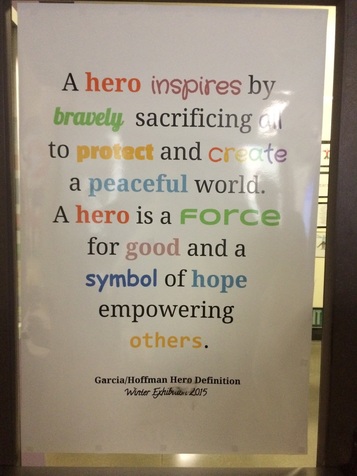 I had to create the superhero for our comic. I was very proud of my final product for the superhero because of how challenging I thought it would be. I got a body shape stencil for me to have an idea of what he might look like and how he would be shaped. I then decided free hand what I should add to my hero and how he should look. I also had to draw and color him based on his character description. It was also challenging to connect the superpowers he had to physics, but I was able to do it with a bit of help on perfecting it. I was able to ask questions and get help, which made the product even better in the end. 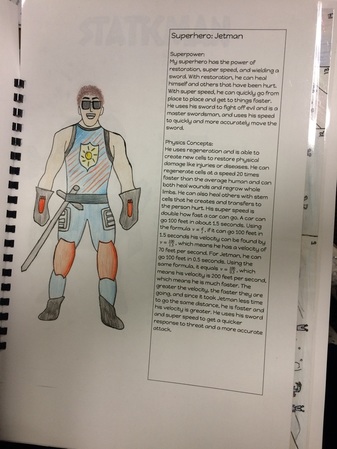