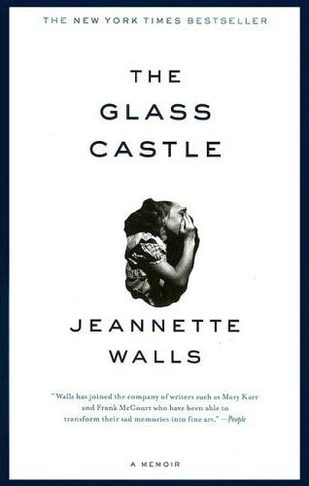 The book I read was The Glass Castle by Jeannette Walls.
How challenging was this project for you? Be specific.
I feel that this project wasn't really challenging for me, because I enjoyed just about everything the project consisted of. I think the only challenging part for me would be the video production and editing because I wasn't comfortable putting my face in front of the camera and I also didn't like the idea of trying to take a video of my thoughts and posting it on the internet. It seemed like something I was almost always warned not to do as a child in the sense of restrictions, so to be told to have to create and upload a video felt wrong in a sense. I feel that once I became comfortable in showing my face and talking on camera, it was a lot easier to film and edit the video.

What was the easiest part of this project?
​The easiest part of the project was reading the book because I was so invested in the story and the character's lives. There was never a dull moment while reading through, and I always wanted to spend work time reading because of how intriguing the story was. The relationships the characters had with each other was so peculiar that it was heartwarming. The father, although what many would call a deadbeat, was truly inspirational when sober, talking about physics and theories and the plans he had made to strike it rich. He was innovative and creative, constantly creating ideas. He gave his children the stars, and I think that's pretty fantastic. Their mother was a struggling artist, and her view on the world is truly unique and peculiar. She also has an odd way of raising children, but it seemed to work for their household. And the main character Jeannette Walls, she is an inspiration at the least. I now realizing I'm rambling on, but I believe that I got so sucked into the book that it was nothing less than a joy to read.

How comfortable did you feel while making your film?
At first, I was extremely uncomfortable. I don't like filming myself, much less posting that video onto the internet, and because I don't do it ever it was very unusual for me to just begin to do. The only time I ever film myself is while singing and playing guitar, but at that point it's far about the music and sound than video and me. As I began to film, I became more comfortable in my speech, angle of my face, lighting, and many other small pieces that anyone else wouldn't have even bothered to notice. I however was very conscious of each and every part and so I let that no matter how many videos I took, I wouldn't have "the perfect one". It also didn't help that there were other people in the room I was filming in, but I took it as another challenge and simply kept taping and figuring out what to say and how to say it.

Did you receive critique and feedback from anyone (teacher, parent, classmate, etc)? If so, who? Was the feedback helpful? (This could be for any part of the project, journal, or video)
​I was able to receive feedback on both my dialectical journals and video by some of my classmates, such as Angeline and Jeremy. It was very helpful because it helped me realize what needed to be changed, things I wouldn't have seen through my own eyes. It also helped me figure out what I wanted to keep and what I should take out of my video. All in all I feel that the feedback was an important part of my final product, and that if I had more time I could've gained more feedback on the video and been able to improve it.

Did you provide kind, specific, and helpful feedback in the journal workshops? Were these sessions helpful and/or fun?
I provided KSH (kind, specific, and helpful) feedback during the journal workshops because I was conscious of what the other person had created and didn't push them down for creating something that they were proud of, even if it had mistakes. I was able to give feedback that could guide them in a direction to fix a mistake or make a choice on if they wanted to or not. The sessions were both helpful and fun, because I was able to show my friends and peers my book and why I thought it was so beautiful, so interesting, so intriguing, and I was also able to hear about their books and what they thought and how they saw them. It also made me want to start a lot of the different books that had been shared because of how interesting they made them sound.

Did you actually read the book you chose?
I actually did. I truly enjoyed reading the book and in general I don't prefer Spark Notes or another source of summarizing because I would rather understand and read the events in my way. I find those sites untrustworthy and bland anyway. They dull the story, make it sound like a second grader could've written it, and take out any and every bit of emotion the book itself offers. I couldn't put the book down at some points, and it was a book I would encourage anyone to read. It really captivated me and was a piece of work that made me feel things, gave me emotions. The best part is that the unbelievable tory was true.

What grade do you think you deserve? Why?
I believe I deserve an A because I completed all of the requirements, read the book, completed the video even with certain challenges I faced, and completed the project in good quality and on time. I do believe an A- would be fair on the video portion because I didn't include all necessary pieces in the clips I took, but I did however meet requirements and was able to explain the book to anyone who asked and go in depth on my perspective and opinions.

If you could change something about this project, what would it be?
​I would do the video earlier on than when I did. I decided to do it the second to last day of the project, although I could have done it anytime that week or the week before since I had finished the book early. I guess I never got to it until that point, and then my computer broke. I no longer had a way of editing the video and I could only take clips during class since the next time I could it would either be 11:00pm or I would be sweaty and nowhere near presentable. I would have also made an outline or quick script for my video because then I could have been more organized in my thoughts and what I was discussing.